(Skip)
Development Status
Alpha Testing has been scheduled for Wednesday, October 7th, 2020 and will run through November 4th, 2020! Check back here for any new announcements.

Thank you for your patience and continued support. In the meantime, feel free to follow us on our social media pages to stay up to date on progress. Moonsblessings, we hope to see you soon!
Demo
Do you want to see what all the fuss is about but don't have an alpha key? Check out our demo and design your own wolves!

View the Demo
Our Kickstarter Pre-Launch Page is now live!

We’ve activated our Kickstarter Pre-Launch page! Follow this link to sign up for notifications so you don’t miss any important KS news: 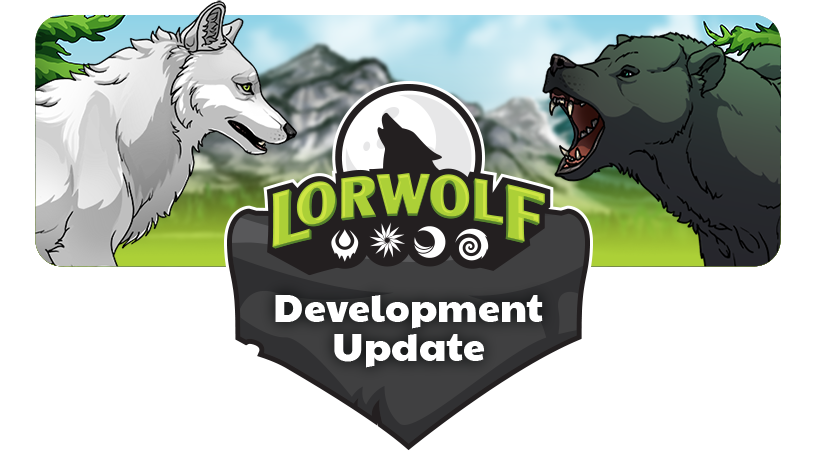 Happy New Year everyone! We have some exciting news to share with you all, including some info about our Kickstarter and Patreon campaigns. Keep reading to find out more!

After a successful Alpha test and a considerable amount of progress made last year, we feel Lorwolf is ready for one more push to get us to the final Beta test and eventual launch! To help get us there, we’ve decided to host a Kickstarter campaign which will help us raise the necessary funds for our estimated development costs. As a thank you to our backers, we plan on including a variety of in-game rewards in the form of exclusive breeds, apparel, companions, and so much more.

We’ve set a launch date for Monday, March 1, 2021 and set a goal to raise $3,000! With your help, we can get the resources we need to finish Lorwolf and release it to the world!

You can expect more information about Lorwolf’s Kickstarter within the coming weeks, including specific details about the tiers we plan on offering and all of their rewards. In the meantime, feel free to tell your friends about Lorwolf and help us spread the word!

In light of our upcoming Kickstarter campaign, we’ve decided to cancel Lorwolf’s Patreon by the end of this month (January). We will be sharing one or two more content posts this month, but feel free to cancel your subscription at any time.

Patreon has funded Lorwolf’s entire development thus far and helped us stay afloat amidst our growing expenses. We can’t thank all of you enough for all of your support, you’ve helped get us to where we are today and we truly could not have accomplished any of this without you. We will be including all of your names in our “Credits” page and anyone who earned in-game rewards through Patreon will be receiving those rewards before the Beta test and final launch!

Today marks the end of the Alpha testing phase and the start of a new chapter in Lorwolf’s development! We are happy to report that the Alpha test went even better than we could have imagined - over a hundred players got to experience the game for the first time and nothing blew up horribly! A huge thank you to all of our testers who diligently combed through the game in search of bugs and offered so many excellent suggestions on how to improve it. We couldn’t have gotten to where we are today without all of you, so thank you <3

Below you’ll find all of our plans going forward, as well as some new and exciting things we have currently in the works:

We have now officially moved into Phase 3 of our development timeline, meaning we are ready to begin working on our Kickstarter campaign! This campaign will help us raise the funds we need to finish development and propel us towards Lorwolf’s official launch. Our tiers will be filled with a variety of KS exclusives, including: A new breed, Companions, Apparel, Forum Decor, and more. We will be posting a lot of information about this Kickstarter within the next few months, so stay tuned :3

The Lorwolf Kickstarter will also feature an exclusive breed tier - the Bracchus! This breed was modeled after the adorably leggy Maned Wolf, a species native to South America. As with all of our KS exclusives, the Bracchus breed change item will only be available for purchase through the Kickstarter, never in-game. More information about this tier and many more will be coming soon!

Here are the preliminary concepts for the Bracchus breed adult models: 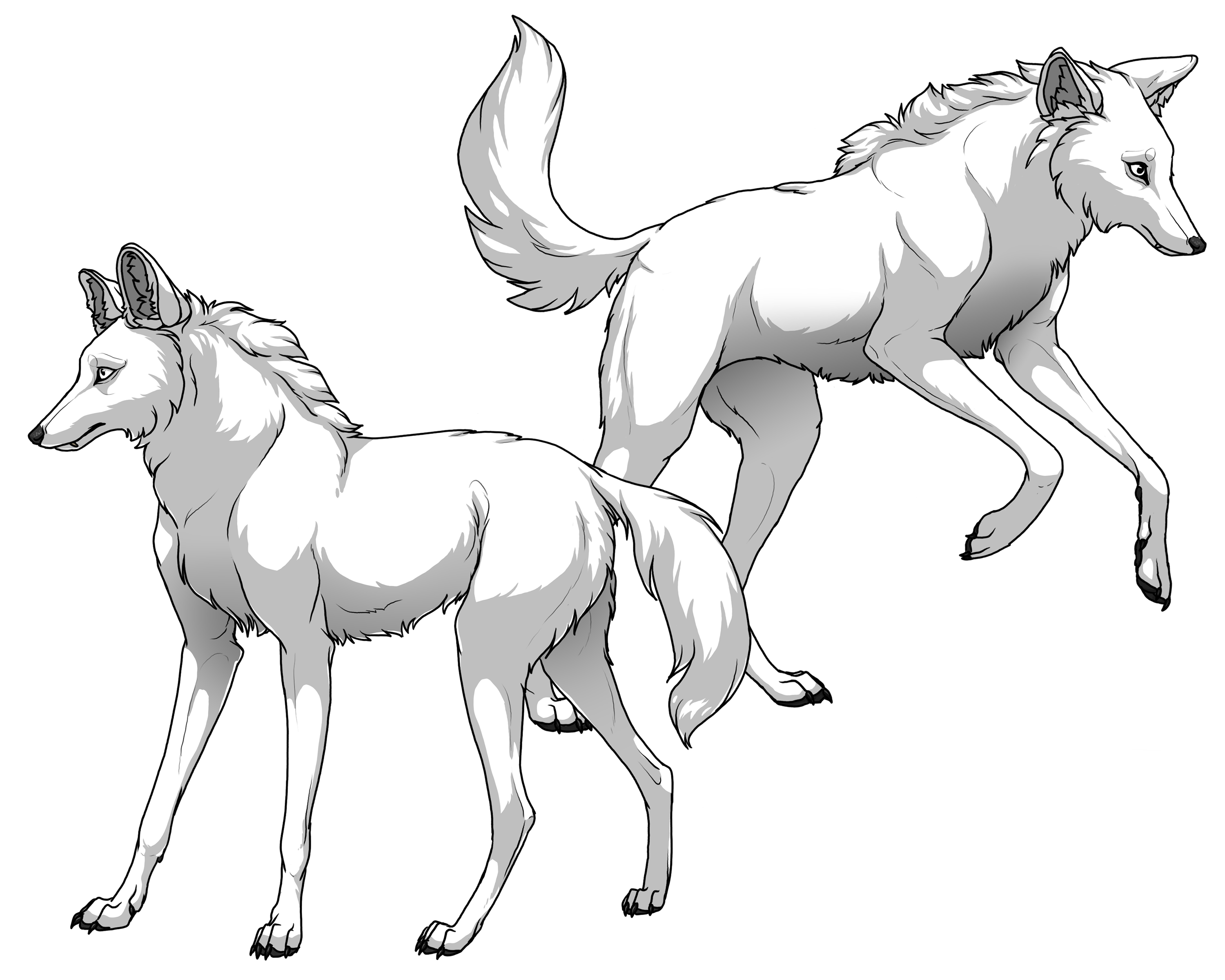 With only a few days left of Alpha testing, we wanted to share a final update going over some interesting statistics, special treats, and some of our plans moving forward.

Alpha Testing Statistics
We were able to gather some extremely valuable statistics for Lorwolf’s gameplay during this testing phase, and we were very excited by the results. Here are some of the more interesting stats we thought you all might like to see!

Special Rewards
As you know, original key owners will be given a Golden Unicorn companion for every key they won/purchased through us. To show even more appreciation, we wanted to create some extra goodies to give to all of our Alpha testers so you can show off that you participated in the Alpha testing phase. Those items include:

I have not finished the art for these yet but I will post an update when they are! We will be sending these items to every person who signed up for the Alpha test in the form of a key code. This code will be emailed to the address you used when signing up, and can be redeemed both during the Beta test and final launch.

Lorwolf Plans for the Future
At 11:59 PM on Wednesday, November 4th, we will be wiping all game data from the server. This will include all user accounts and IDs. We will also be locking the Lorwolf Alpha Discord server from any future communication, but will keep it saved so that we can go back and reference it if needed.

We will be hosting a Kickstarter to help us raise funding for the rest of Lorwolf’s development, and also host one more round of testing - the Beta test. We will conduct the Beta test in much the same way as this Alpha test with a full month of testing and a special Beta testing Discord server. People who earned Alpha keys through our now retired Patreon tiers would have earned the same number of Beta keys, so those that have extras may trade them to others if they so wish! Anyone who hasn’t earned a Beta key yet will get a chance to buy one through the Kickstarter at a base price of $5.

In addition, we wanted to share some good news! We will NOT be wiping usernames or IDs after the Beta test has concluded, so everyone will be able to keep the name and user ID they used during the Beta test for the final launch. The Kickstarter will also feature an Early Access Tier that will allow users to sign up and play the Beta test 2 days before anyone else so they can snag a lower ID if so desired! Anyone who earned in-game rewards will also be able to redeem those rewards during the Beta test, like the Golden Unicorn, the Grimalkin, Alpha tester rewards, and anything else!

We want to thank all of you again so much for taking the time to test out Lorwolf. We appreciate your patience, diligence, and efforts in finding bugs and errors that we missed. We were able to gather hundreds of your suggestions which we know, once implemented, will make this game all we want it to be and more. Seriously, Lorwolf would not be where it is today without all of you, so thank you. We hope to see you back for the Beta test and official launch of the game!

We made it! Alpha testing has now begun. Alpha testers may now register for an account and begin playing! Please review the Alpha Testing Guide if you haven’t already! Have fun, and moonsblessings from the Lorwolf Team <3

Greetings Alpha Testers! We hope you are all excited to begin testing, starting tomorrow at 11:00 a.m. CST! We wanted to share some last minute announcements with you so that you are prepared for the grand opening:

We are anticipating a large strain on our servers which may cause outages and/or delays. You will be sent a confirmation email upon registering which may take up to 10 minutes to arrive in your inbox. Please be patient (and check your spam/junk folders if you've waited longer than 10 minutes)!

We also ask that you reread through our Terms of Service page as well as the Alpha Testing Guide. We have made a few changes to these entries so please take another look before you start testing.

Hello everyone! All of our Alpha testers should have received an email on September 19th that includes their Alpha code and other information regarding the test. If you are an Alpha tester and haven’t received this email, please send a message to support@lorwolf.com and we will be available to assist! Thank you, and moonsblessings